News from Palestine and Israel

News from our partners in Palestine and Israel

Joe DiGarbo writes, “…the terrible destruction and death that they experienced [in Gaza and the West Bank] in July and August grieved me so deeply that I was trying to find a way to get especially to Gaza right away, even to help them salvage what they could from destroyed homes, mosques and whole neighborhoods. I know my feelings, not my good sense, were running my desires. As it has turned out, it has not been possible to be there. So, I rely on email, Facebook, texts and Skype calls to lend my care and support. It always amazes me how they carry on and appreciate moral support from us, particularly, assurances that they are not being forgotten. 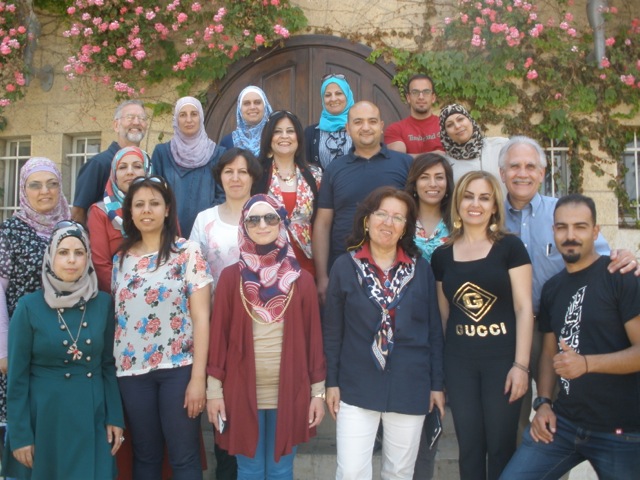 “It was difficult to not hear back from friends and colleagues for days and weeks. ‘What has happened to him or her?’ Then I’d hear, and feel relieved. All of you have experienced this type of thing. One thing I have learned, particularly in Gaza and the West Bank, is that we do whatever we can and let the people know that we will continue to do so. Even a little love can go a long way.

“Out of all of this, plans are being laid for a return trip to the West Bank, Gaza and Israel beginning mid-May 2015 for about 3 weeks or more. Mariam, who some of you met at the AVP International Gathering in Ireland, and who is a psychologist, is putting on weekly workshops and short sessions out of her counseling center, apprenticing recently trained facilitators. She had developed an active Facebook site and has a clear vision of how AVP can be used in the West Bank. She’s amazing.

“She wants help dealing with the trauma that so many have recently suffered; she has taken up our offer for a trauma focused advanced AVP workshop for those who have already been trained as facilitators; she wants to begin workshops in a local Palestinian prison as well as a workshop for women who have been released from an Israeli prison; she is even planning mini AVP workshop sessions to be introduced in kindergartens. She is very connected in the Hebron area.

“There are plans developing with another organization, where Marina, the other Palestinian woman, who attended the AVP-IG, is working. She is in Ramallah, the West Bank. They also took up an offer for us to provide a trauma-focused advanced workshop for those facilitators who have already been trained. A program director, who was trained in May 2014 and who is very supportive of our work, is applying for a large grant from the US Consulate for funds to have our work be part of a larger project he is developing. He is, also, an amazing person.

“The plans for Israeli are not fully developed at this time, but we continue planning. As you can see, help is needed for May 2015.”